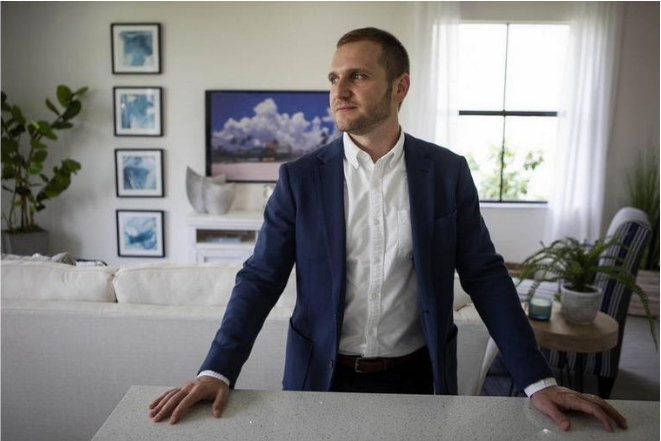 One is a lack of entry-level housing. 13th Floor Homes is building Arbor Parc, the Riviera Beach development where houses start at less than $300,000. In a county where most new houses sell for more than $500,000, Arbor Parc has seen brisk sales, Nunziata says.

“It shows that untapped demand for homes at a more affordable price point,” Nunziata says.

Hometown: Littleton, Colorado. Then I grew up just north of Orlando. Following Orlando, I went to Manhattan. Then I made my way to South Florida. I live in Miami Shores now.

About your business: 13th Floor Investments started in 2006. I joined in 2009, and that was obviously a distressed period of time. If you bought a property in 2009, by 2011 it had already appreciated even if you didn’t do anything. In 2011 or 2012, we started to emerge from that period, and we began to evolve into more of a development company. We’ve done over 2,000 condominiums. We also own some commercial investments. Our first home-building project was a community called Central Parc in Tamarac. We had typically developed lots and sold them off to Lennar and DR Horton and other national builders. But this time, we decided, “Let’s give it a shot and build the homes ourselves.” Our focus is on infill developments. We’re seeing more people who want to be proximate to city centers and closer to their jobs, and the offering of new products in those areas is almost nonexistent.

You’re building homes on a couple of former golf courses. Is golf dying? I definitely don’t think the sport is dying. I definitely think the sport is going through a reset. South Florida is wildly over-golfed. A lot of South Florida was built almost as a retirement community, or with that mindset. Golf courses were built as an amenity to sell homes. Our market changed, and the people who were coming here changed. For the people who still play golf – and I fit that category – they’re playing less golf. I’m probably lucky if I play 10 times a year now. Growing up, I was in the Junior Golf Association, and I played golf all the time. Ten years ago, I played twice as much or three times as much as I do now. We’re seeing less and less people are playing golf. As a result, there’s less demand for golf, and there needs to be a reset.

First job: I’d done summer jobs as a teenager. My first real job was working in banking. I worked for SunTrust in their commercial banking department. As a lender, you tend to be as risk-averse as possible. You look at the downside and how things can go wrong, instead of looking at the upside and how much money you can make. So I think looking at downside risk was one of the biggest takeaways from my time in banking.

Best business book you’ve ever read: I have a problem with bests. My wife always wants me to rank things, and I tell her there are lessons you can take away from any book you read. Right now, I’m reading “Principles” by hedge-fund manager Ray Dalio. The way he looks at the world has been helpful. I don’t want to say it’s the best book I’ve ever read, but it’s what I’m reading now.

Biggest challenge: Managing the growth of our business. When we started as a homebuilder three or four years ago, we didn’t really look at is if we were starting an operating business. We were just focusing on one project. Now, we’re trying to run it as an operating business. We think there’s room for a local private builder in this market. We have pretty big ambitions to keep growing in this market. GL Homes is a fantastic builder, and we look to them as something to emulate.

Biggest mistake you’ve made in business: Not buying everything during the downturn. If we think back to that distressed period of time, everything was cheap but there was a lot of uncertainty in the market. We probably obsessed a little bit too much on the numbers and paid too much attention to the details. We passed on quite a few opportunities that we probably shouldn’t have.

The most important trait you look for when hiring: Honesty. The other one that’s huge for us is work ethic. We’re a relatively small organization, and we want to make sure that everyone works hard. Smart people who work hard will be able to figure it out and get things done.